Private pool villa built in the olive groves of Thesprotia

The villa is a modern building (82 square meters) with a ground floor and a loft which are connected by an indoor stairway. It can comfortably accommodate four persons.

It disposes two bedrooms (one of which is a loft), a bathroom, a kitchen room, and a lounge with a fireplace. In the kitchen room, you can find all the modern electrical appliances.

All kinds of houseware

A retreat but a setting-off place for tourists with naturalist interests as well, Villada is built in olive groves of 432 square meters of extent and is located in Margariti, of the Prefecture of Thesprotia, and combines mountain holidays with sea holidays as well.

Villada gives you the possibility to carry out all the activities that a city can offer, while at the same time you can enjoy the peacefulness of our traditional village.

It is ideal during the whole year and combines mountain tourism with sea tourism. Margariti has a landing field and can you come with your own plane.

Margariti is one of the most historical areas of Epirus. According to the Presidential Decree 19/10/78 (Official Government Gazette 594 D') it was characterized as a traditional village. In the center of the village as well as in its wider area remains of polygonal walls, ancient tombs and coins as well as inscriptions with Latin letters have been found.

The building process which gave it its modern form began in 1438 by the Venetians. It was conquered by the Turks in 1449, and it was then when the violent Islamization of its residents started.

Nowadays it is the capital region of the homonymous Municipality of Margariti. It disposes public services (Health Center, Police Department, Post Office, Veterinary Clinic and an Agricultural Development Bureau), schools (Nursery, Preschool, Primary School, High school, Lyceum). Moreover, it disposes associations and other Not-for-Profit Institutions (Cultural Club, Sports Club, and Women's Association) the aim of which is the rescue, the elevation and the maintenance of the cultural heritage and the folk civilization of the area. Aiming at all the above, many are the athletic, cultural and other manifestations that are carried out throughout the whole year.

The economy of the area is mostly of an agricultural and cattle-breeding character; however it is based to a considerable degree on a quite important commercial and micro-commercial professional activity, while lately tourism seems to be contesting an important share.

The daily commercial and industrial- commercial activity is carried out in the "market area", on the left and the right side of the central street where most of the shops and services are situated.

But, the further elevation and promotion of the cultural heritage is also necessary, as well as the elevation of the magnificent natural environment and the development of the touristic potential, in combination with the rendering of services and the further financial activity, so that the development of the area will be continued at a faster pace.

Daily excursion to the beautiful City of Ioannina, to the historical center, to the castle and to the little island.

Daily excursion to the magnificent island of Corfu

Daily excursion to Zagorochoria that are characterized by a unique architectural style. 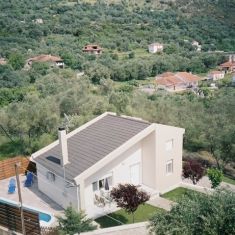 
The family, of Fotis and Aleksandra, wishes you a pleasant stay and enjoyable and peaceful holidays.